We’ve launched a new initiative here at Global Street Art: artist residencies! We sat down with C Coward, our first artist-in-residence, and he gave one of the best and most candid interviews we’ve had to date – enjoy! 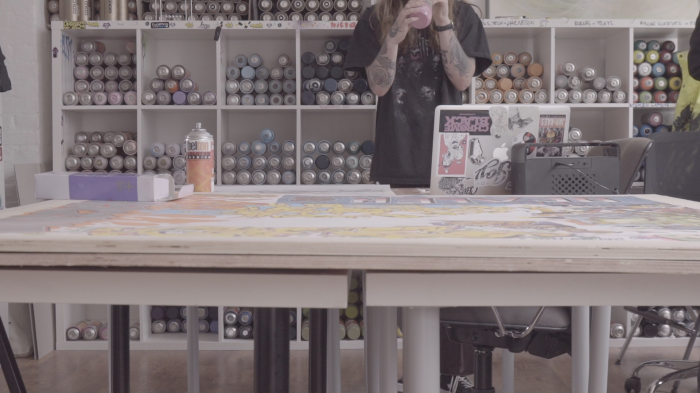 Where are you from?
Born in Salisbury, but spent most of my life in a small town called Telford in the West Midlands. The green hills of Shropshire. Birthplace of Charles Darwin and the first ever Iron Bridge.

Tell us about how you first got involved in street art.
It was a slow process, really. It’s something I’ve been interested in and spectating via the frivolous world of Instagram for a while but never had the guts to try myself. Birmingham has a really good scene for writers so I always loved seeing it. But not knowing other folks who painted played a huge part, I like to have at least a rudimentary knowledge of what I’m doing so even that very basic knowledge in practice wasn’t available to me. Eventually I’d had enough of scratching my ass waiting around and took to YouTube. That was only a couple of years ago, maybe back in 2015 and it was absolutely diabolical, nobody ever saw the first 4/5 pieces I did haha. Moving to London was good for me in that respect, meeting a lot of active writers and like-minded character-based painters was really awesome and that sparked a whole new source of online conversation with others dotted around the globe who were very humble in sharing tricks and tips – for which I’m very grateful. It’s definitely a medium I’m looking to push further in the coming years.

What is your spirit animal and why?
Hm. I’d like to think it’s a dog. My love for dogs surpasses most things we share this planet with. They’re intelligent, loyal, playful, cute as hell and just generally all-round happy creatures (with a few exceptions, of course). But the chances are I’m probably closer to a sloth haha: slow, melancholy ’n’ sleepy. If only science could combine the two beings to create the animal that could more accurately answer this question for me. Perhaps one day.

Streets or galleries?
This is a tough one. I don’t believe there is a straight answer to this, it all comes down to context and the use of space, I guess. Some pieces would work better on walls than they would on canvas in a gallery and vice versa. But, if I was to switch my brain off for a moment I suppose I’d say streets, there’s something way satisfying about coming across fresh pieces by wicked artists.

Tell us some of the techniques you use to create your pieces, what’s your special move?
Most of my practice is situated in illustration. When I first started out I stuck solely to crosshatching. Now I just kick it with the hatching so it’s all unified and one-directional with shading and tone – plus it takes up a little less time which is great news. Looks kinda like a big printer done it, oscillating on a fixed arm haha.

What tunes do you listen to while you sketch?
My music taste is super varied. It all comes down to the mood I’m in! It’ll go from hardcore to hip hop and a whole bunch of everything in between in a matter of minutes. I grew up listening mostly to metal and hardcore and spent my teen years in that community, so that’ll always hold a place in my iTunes, alongside the likes of Nirvana and Pearl Jam who I owe that particular direction to haha. My two most recurrent artists are Father John Misty and Deftones but also I’m fond of the podcasts of Joe Rogan and Duncan Trussel, stops me getting distracted so much by singing and pissing my flatmates off.

Who or what are your biggest creative influences?
This is the big question, it’d be too easy to write an enormous essay of a response to this so I’ll try to keep it short. I’ve always been interested in the work of the old masters, especially in the sense of draughtsmanship, folks like da Vinci, Francisco Goya and Albrecht Dürer. Norman Rockwell, Euan Uglow and Neo Rauch are artists I spend a lot of time gawping at along with a whole bunch of artists aligned with the Impressionist movement. There are just too many artists to credit, I’m sure by looking at my work you could decipher where my interests are. I spend a lot of time watching movies and cartoons. French animation such as The Triplets of Belleville and The Illusionist carry a lot of influence, the character design and style is impeccable.

Pens or brushes?
Like I said before, I’ve spent my artistic career embedded in illustration for the most part. So without a doubt I’m much more comfortable with pens than I am brushes or any other medium for that matter. But if I had to choose I’d spend my time painting with brushes. I’ve recently made the transition from acrylics to oils and I’m so mad at myself for not doing it sooner. Absolutely love them.

You’re currently studying painting at Camberwell College of Arts, UAL. Do you have any advice/insider tips for artists who aren’t doing the whole uni thing? What’s the best way for them to go about honing their skills?
Honestly, I’ve used university as an escape from the Midlands to move to somewhere more centred around the creative industry and to meet people who are wired similarly to myself. I spent my working life stuck in factories doing jobs that I hated, putting together car filters, packaging cling film, stacking welded beams and literally hand-mixing fruit and nuts for supermarkets—8 hours a day putting peanuts and raisins in a god damn metal box and mashing them up with my hands. Totally abhorrent times haha. Coming to university gave me the time to really focus on my practice in a really intense manner that sometimes mentally batters me and screaming into every pillow available is the only option. So, I guess my advice is just invest the time, progression doesn’t come from NOT doing something. The 10,000 hour rule etc. etc. I’m not totally satisfied with the vast majority of my pieces and most of the artists I’ve spoken with are in the same boat; some of these folks are offensively sick at what they do, but satisfaction doesn’t come hand in hand with progress really, does it?

What advice would you give to artists looking to get involved in painting the streets?
Don’t be a wasteman like I was and just do it. Speak to folks and get out there, it isn’t gonna happen while you’re looking at Instagram picking your nose or whatever. Obviously mould this advice around the legalities and such of wherever you’re from. Or not. The point is, if you want to get involved you gotta get stuck in.

What advice would you give to young artists in general?

Again, just put the time in. It’s not easy to motivate yourself every day to just crack on until you can no longer see and your hands are cramped up but if you want it, you gotta strap yourself in and go at it like a nutcase. Don’t get discouraged by anyone giving you lip. The thing I personally struggle with the most is my own brain telling me I’m dreadful at everything I’ve ever done and ever will do which really sucks, though this little habit of mine is definitely the cause of any progression or advance I’ve made over the years so perhaps it’s not such a bad habit to have. The best bit of advice I was ever given was that inspirational lightning bolts don’t exist, don’t wait around for the ‘perfect’ idea—it won’t happen and you’ll just be chilling staring at the dreaded blank sheet of paper until the end of your days. Inspiration comes from the time and the process. Have fun with what you do in whatever medium you choose, if there isn’t a heart-wrenching, selfish and crippling love for this what are you doing it for?

One thought on “Interview with C Coward”