Evolution-2, the ‘largest’ mural in the world, took 35 days to finish and covers a whopping 10,800 square metres. The piece was created in Russia but if you’re thinking it’s in a big city like Moscow or St Petersburg, you’d be wrong.

The home of the ‘largest’ mural in the world is located in the small town of Vyksa, which has a population of just 52,600 people. So why Vyksa?

Vyska is home to ART OVRAG, the first annual cultural festival in Russia that transforms the life of a whole city. The festival is held annually and runs for several days, turning the city into a large creative hub, which includes more than 50 events in the areas of theatre, music, architecture, visual arts, sports, dance and food.

ART OVRAG, was the perfect setting for a large mural to be painted but it was Sabina Chagina, Co-Founder & Curator of the Artmossphere Creative Association, who organised this colossal project. We asked her how the team decided on Misha Most for the project. 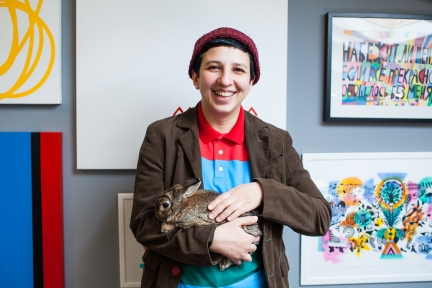 “The whole project was held in an open competition format. We received about 240 applications from around the world. The jury unanimously chose the sketch made by Misha Most. I was a member of the expert council and I am the curator of the project, and my opinion in this case coincided with the opinion of the jury.”

“Misha Most in his art often touches upon topics that were proposed for the competition – the future, technology, science and space. He did not have to adjust to the “conditions”, he just did what he usually does.”

Creating a large mural is one thing, but creating the ‘largest’ mural in the world is another ball game all together. It seems Sabina and the team had no intention to break the record from the start, it was only after doing some research into the current largest piece that they realised they were planning the world’s ‘largest’ mural.

“It was important for us to set this record, because we realised that this is the greatest monumental painting on the wall, made by one artist. Initially, we didn’t have this goal in mind, but eventually, after we did a research, we realised that we were on plan for beating the current record.”

Misha Most, the artist behind Evolution-2, started painting during the dawn of the Russian street art movement in 1997. He later became a member of Moscow’s first graffiti team and his personal projects have been displayed in countries such as Russia, Ukraine, Azerbaijan, USA, Italy, Switzerland, Germany and France. 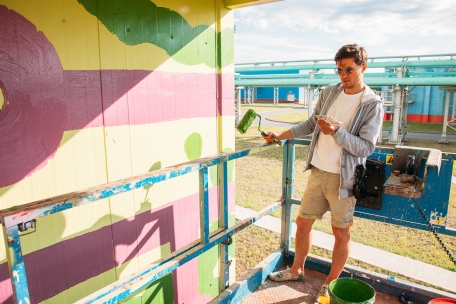 Misha Most in action

Now, 20 years on from his humble beginnings as a street artist, Most has completed the ‘largest’ mural in the world.

We spoke to Misha Most to learn more about him, his work and of course the colossal task of creating the world’s ‘largest’ mural.

How did you get into street art?

I started writing graffiti in ’97, that’s the year when graffiti culture was at a very start in Moscow. I was part of the first wave of street bombing and train writing. Few years later my letter pieces transformed in to messages and images, which later became known as street art. From that point I started getting interested in contemporary art and now create artwork in my studio, participate in shows and speak at lectures.

What was the inspiration behind the artwork?

Making the sketch for the open call, I was inspired by my series “the future of the past“.

This series is a kind of a reflection on evolution, progress, or the regression of Mankind in general, and the individual in particular. Vivid visual images are complimented by theories and hypotheses of the scientists from the 60’s-70’s of the 20th century on the near future, which is already our present, regarding changes, both – in the social structure and psycho-physiological characteristics of the Homo Sapiens. How did you go about designing the piece?

Actually I never in my life have spent so much time on sketching a project. I try to spend very little time on that part of the art process but somehow I felt that the task put by the organisers and the jury very well fitted my series. So it took me about 4-5 evenings, choosing the right elements and putting them together in one very long composition, then choosing the right colours.

I used photos from the life of the factory, like the human-worker controlling several computers at a time really fitted my topic of the possible future. I also thought it is important that the factory workers could see something familiar to them in that big artwork.

What was the most challenging aspect of this piece?

The hardest part of job was of course the scale, which at the same time was the most challenging and most interesting part. Anything you wanted to do, any process, took 2-3 times longer then it would in any normal situation. Just to walk from one end of work to another took 10 minutes, the total amount of paint used was 2.5 tons, the usual amount any colour I was mixing was 30 litres. [The walls were] all previously coloured, but sometimes I spotted some areas where the colour needed to go a bit darker or lighter.

The weather this year in May was also not very friendly, the rain was really getting on our nerves sometimes, but we still fitted in the planned 45 days of work. Do you have any plans to go bigger?

I was actually never running for size, it’s not really the main aspect of the art itself, for me it was more about the challenge itself, about seeing my art in such a huge scale, about the ability to go from a small digital picture to an enormous size mural painted by hand.

My plans are not about bigger but more about further, trying out the new techniques, and combining technology with art. My next solo show at Winzavod in Moscow in September will be exactly about that.

***Guinness World Records are considering the inclusion of the winning project in the collection of world records, hence why largest has been written as ‘largest’.***

2 thoughts on “‘Largest’ Mural in the World”