The huge statement piece soars a monumental 46.8 metres (153 feet) from the ground. Using the full length of the building as its canvas, the striking 11 metre-wide design centres on an owl in flight, alongside the moon and a crown, as a nod to the artists involved.

The mural is part of the citywide street art project ‘A City Less Grey’, initiated by East Street Arts and fully funded by LeedsBID (Leeds Business Improvement District). The project aims to animate the city and incorporate works of art onto and into Leeds’ buildings and streets.

Nomad Clan are no strangers to tall murals, you only need to check out some of their past work to see it was only going to be a matter of time before they painted the UK’s tallest mural.

After making it down from the skylift – and after giving them ample time to chill at ground level – we spoke to the duo Cbloxx and AYLO (aka Joy Gilleard and Hayley Garner) about Nomad Clan and Athena Rising.

How did you get into street art?

Cbloxx: We both started around 10 years ago separately trying to carve out a creative career in street art/graff. It was only 2 and a half years ago when we eventually began working together as Nomad Clan!

I was always creative but fell short in education. I couldn’t find my way with art in an academic sense so basically just worked a series of unfulfilling jobs in retail and then on to Youth work eventually. Being in bands was my thing for a while but you have to rely on other people having the same vision for that to be successful. Street art was a release for me and I finally had somewhere that I could put my art and I only had myself to answer to.

I had some successes earlier on whilst being a youth worker that now feel insignificant in the scheme of things, exhibiting in London amongst a Banksy, short lived recognition. Then at some point I left my job and basically didn’t look back…was broke for a long time! I didn’t have a big plan or the confidence to make one. Bit by bit stuff got better with opps like York Minster residency and then luckily I met Hayley… that was what I would now class as the beginning of my proper career!

Aylo: I never really set out to become a professional street artist, I didn’t realise it was a thing! It was an interest and hobby while I was in my 20’s until I opened a spray paint shop in Manchester. I was struggling to find work as a designer so took things into my own hands. The shop sustained for 5 years but never really satisfied me as the commissions that came with it were very commercial. 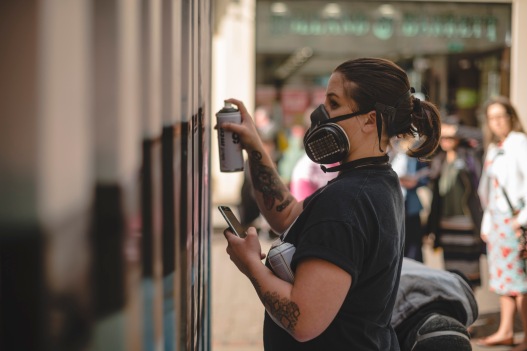 The shop was full time but leaving that and going freelance as an artist was a leap into a new chapter. I had previously never felt I would be good enough to get these opportunities but once I put confidence issues aside and began to engulf myself in the scene I soon set goals. Nomad Clan works in part because we have confidence in each other and we have a vision for our shared futures.

Can you describe the style of street art you create?

Cbloxx: I think we are a blend of both our respective styles that somehow has become a very particular style in itself! Sometimes our Nomad Clan murals look like giant folklore book illustrations – there is a definite playfulness to what we do which is very much from Aylo’s ball park, but then its balanced out by my melancholy/dark sides too. I cant help but dabble with elements of realism as it’s what has always seemed to come naturally to me where as Aylo was more graffiti, letters and bold graphics before we began working together.

Aylo: Over the years the size of the walls we paint are getting bigger and bigger which strangely alters the look of your work, stripping back some of the detail etc, our favourite thing to do is giant murals so I think visually we are adapting more around that now.

What challenges did you face whilst painting this mural?

Cbloxx: We had a very real fear of the cradle (sky lift) before getting to work on this beast! We have never been dangled off a roof before, we are used to lift platforms but they are machines that sit on the floor. Dangling sounded like a nightmare…wind is an enemy at the best of times when your spray painting but being suspended on a swing that is basically weighted down at the top is a whole new level of scary.

The swaying around in Leeds gales was nauseating, the sea sickness lasts days after spending so much time painting so that was something to contend with daily, it’s horrible. I nearly threw up in my respirator after a mega wind storm came from nowhere, especially as it’s a 3 minute ride to get back to the bottom. Hayley did a cry.

Aylo: The sketching out on that scale is quite an undertaking too, it’s very easy to get lost when working from the grid but as we had that down then it was a lot more straight forward. Then there was the torrential rain, other days baking hot sun whilst wearing all the construction PPE in the world! We had the hottest day in something like 40 years which melted one of our film teams time lapse equipment haha! We had too many issues with filming this project, it was more stressful than the painting itself!

How long did it take to paint?

Cbloxx: In total we think it was around 16 days though it was likely less than that, we had a lot of half days and 2 hour days due to the weather. We had predicted it would take a month but were pleasantly surprised at the progress we made.

How did you feel whilst painting this huge mural?

Cbloxx: It was surreal, exhausting, overwhelming, exciting and nauseating haha. We had put ourselves under a lot of pressure to make sure it would be just right, we had spent 7/8 months working with all the different organisations involved and had invested a lot of time keeping everybody happy with the design as well as trying to retain our creative integrity/identity. To see it finally finished was a bit like coming to the end of a marathon. There is a slight spiritual feeling but it’s hard to work out if thats just pure exhaustion!

Talk to us about the significance of the name of the piece?

Cbloxx: Like most of the public artwork around Leeds we used the owls on the coat of arms as a starting point. Although it’s ‘been done’ it seems that people are naturally drawn to the owl, in many ways it resonates and of course this is a huge statement piece for Leeds, if anything it needs to be intrinsically connected to the city!

Owls historically signify intelligence, knowledge, wealth, learning and transition, most of these ideas are derived from ancient meanings/practises and have been used symbolically by many cultures. The owl is sacred to the Greek goddess of learning, Athena. There are a lot of gold design centric motifs that are inspired by the study of mathematics in nature. Sacred geometry symbols are often used in ancient architectural designs as well as being repeated in natural forms, it is a common denominator in humanity that connects us all in a fundamental way.

The main themes we wanted to play with are basically reflected in the buildings use which will be a networking/co-working space – all to do with connectivity, creativity and  innovation – we kind of looked at those themes but within nature, at a time when so many urbanites have become disconnected to it.

What has the reception been to the piece?

Aylo: Largely positive! This is a first for Leeds so I think it means a lot more to people than it would elsewhere, equally we expected more of a backlash as some people really do just prefer blank walls. There are no giant murals elsewhere and few in the actual city centre, giving something to the community on such a scale is a great honour and a privilege. . The fact it’s the biggest in the UK is just the icing on the cake. 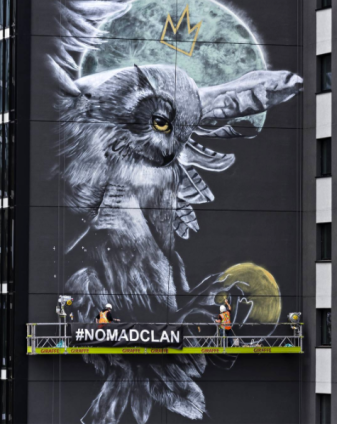 Will murals like this change public perceptions of street art?

Cbloxx: Hopefully for the better but you see mixed reactions due to perceptions of gentrification and a skepticism around woking with companies. Collaborations like this rarely blur the lines between ‘corporate’ and artwork with integrity but luckily we steered away from anything advert based and tried to keep as true to ourselves as possible. The fact that East Street Arts were onboard helped exponentially to retain the artistic merit of such a project and luckily all other parties kept an open mind, so in the end everything balanced out nicely! 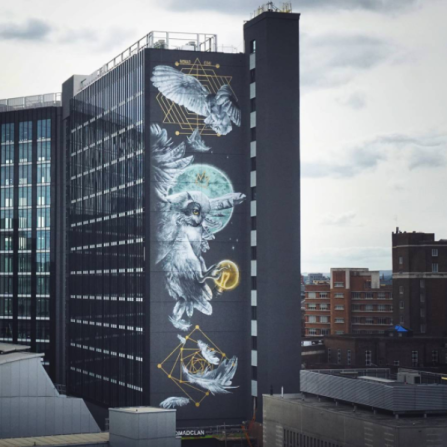 Working in partnership with the Council, property developers, business improvement districts you can easily imagine everyone has there own boxes they want to tick. Worse case scenario it could have easily become more of a corporate commission in the wrong hands, but we are stubborn when it comes to keeping things ‘nomad clan’! We are surrounded by adverts at every turn so it always amuses me when people become disgruntled by a piece of artwork because of the wall of the business it sits on.

You will also equally still get people who don’t believe it’s a valid art form due to the medium used! Like a spray can is some how less than a paint brush. All the conversations around this, the disagreements etc are the thing that keeps this alive so its all good!

Huge thanks to Joy & Hayley taking the time to speak to us and we very much look forward to seeing what they get up to next!