NWO – ‘New Wall Order’ – is an Italian underground project playing with the conspiracy theories’ name and concept in order to highlight the freshest artists in the country. Actually, the NWO guys feel the need of a New Wall Order to look ahead (never forgetting the old-school yet!), to broaden the horizons of the contemporary muralism scene. And with a ‘street-art conspiracy attitude’ to cap it all.

They say all good things come in threes and Italy has recently been hit by the 3rd chapter of the NWO saga. NWO, ‘New Wall Order’ (a spot-on naming by artist CT), is an underground ‘street-art conspiracy’ project run by Italian urban-artist Giorgio Bartocci and friends; an independent and contemporary muralism gathering handled with the aim to redefine the post-graffiti art boundaries. Here’s why the name of the project, NWO, ironically harks back to the Illuminati & conspiracy theories’ tag in order to display some of Italy’s next level muralists – that’s to say the ones with the task to destroy the ‘old order’ through their new and innovative style.

No surprise if the 1st and 2nd NWO edition hosted the fresh wallpaintings by artists such as 108, 2501, Giorgio Bartocci, CT, Eleuro and Ufocinque (in the Milanese historical space Officine Creative Ansaldo), as well as Abik, Alfano, Alberonero, Aris, Giorgio Bartocci, Centina, G.Loois x Domenico Romeo, Luca Font and SBAGLIATO collective (outside the SPAZIO 20092 occupied-social-structure in Cinisello Balsamo, near Milan). Each and all sticking to the NWO ‘conspiracy-attitude’ shown by their own in-the-van murals…

And so, for the 3rd chapter of its underground saga, NWO did welcome back an old acquaintance: Abik. An artist boasting a history of over twenty years of graffiti who’s perfectly fitting the project’s flow thanks to an abstract flair born from the gestural interaction with urban surfaces – shaping an iconography in between pictorial and architectural. 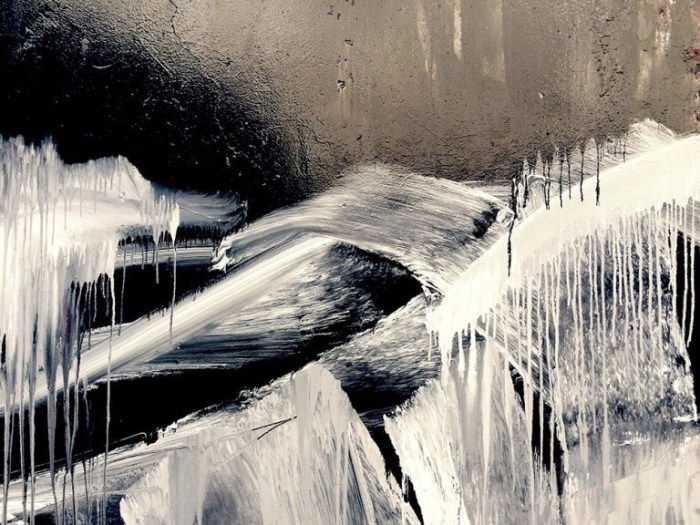 As a modern abstract expressionist, Abik brings forth suggestive letterings (often unreadable) which bet all on evocative scenarios made by several layers rich in dripping details. Cryptic yet poetic somehow, his work speaks through a language similar to that of ‘action painting’ and is almost a proper rite – that’s to say “art as an act more than an object” – whose gestures, effects, ‘trickles’ and textures reach our subconscious recalling deep and atavistic emotions just like creative archetypes.

Not by chance for NWO 3 as well Abik treasured his gestural abstraction creating a new one of his ‘thick’ wallpainting in black and white – the supreme synthesis of everything – where signifier and meaning chase and overlie each other in a waterfall of ancestral figures. The mural is titled ‘Gestural’, and the video NWO realised ad hoc reflects both the artist’s conceptual inspiration and abstract expressionism-devoted aesthetic, for a worthy to be decoded artwork. 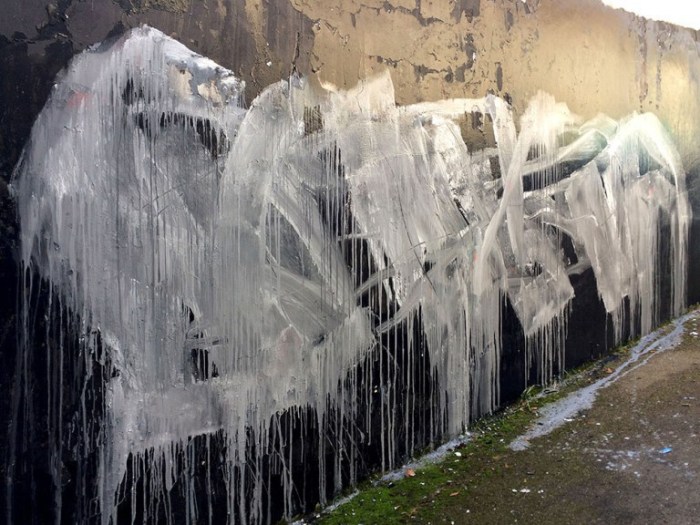 Everything flows, nothing stays still, NWO will keep on organising its conspiracy happenings, likewise Abik – at the peak of one of Italian (and not only) most engaging post-graffiti scene’s genres – will always take his stylistic research to the next level. Drop by drop.

Featured image courtesy of Abik. You can see more of Abik’s work at  www.themostunknownartist.blogspot.it

All images provided by the author.