In an in-depth interview, Izak One talks to GSA writer Merilin Ülem about his experiences of graffiti and street art culture from Chile to Estonia, and describes the meaning behind some of his best walls! 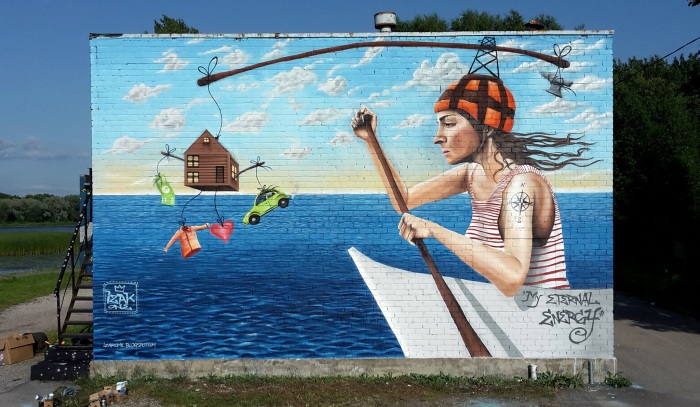 Can you tell a little bit about yourself? How did street art come into your life?

I am Izak One, 30 years old, from Chile. I am a street artist and architect.

I got to know street art through hip-hop culture and graffiti when I was very young, like 7 years old. Me and my brother danced breakdance, so in those times we had some faint knowledge about it, but later on in school we met other guys who were tagging all around. We started like this, just “vandalising” and doing tags in our school, neighbourhood and elsewhere. When I was 11 years old I got a blackbook. I had spent a lot of time just drawing on paper since kindergarten, but never on walls, so one day my brother Zosio brought me some spray cans and we started to practice in our grandma’s backyard (of course we got some complaints). Since then we started to become more and more involved in graffiti .

Later on we formed our crew called HGC crew (Hermanos Graffiteando Calles) in Iquique City around ’98-’99. The graffiti scene was so ‘new’, we were kind of pioneers in that city with other friends from other crews. So basically street art and graffiti have been part of my childhood and life for a long time thanks to my brother, as he was the one who gave me the impulse to get into it.

How did the idea of Zavood’s mural come to be? (Zavood is a restaurant in Tartu, Estonia!)

I met the owner [of the restaurant] when I was painting for Stencibility street art festival. Later on we talked about doing something outside because they have a great wall. The owner agreed and said you can do whatever you want.

With any new idea, I almost always take in consideration the wall; its shape, its doors, windows and all of these kinds of details, so the idea was born to incorporate these elements into my piece. I saw that the wall had an outdoor light and all my focus was on it. I wanted to make a clean piece, clean background and only one main character. I designed one girl hanging the outdoor light, with high contrast levels. I titled this work “The light of consciousness never goes” and if you analyse my piece in daylight you can see the ‘light’ coming from the spot light because I painted it, so it literally NEVER goes :). The Zavood team really loved it! 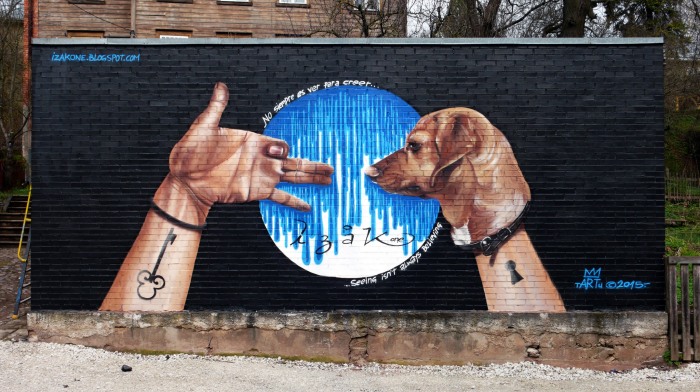 What’s the idea behind your wall “Seeing isn’t always believing” in Tartu?

It’s an invitation to keep our minds a little more open, to not stay with the first impression about things and to regain the eyes of a child. This piece is also intended in a spiritual sense, it doesn’t matter which religion you follow, faith isn’t material, it is just over there, following it depends on our souls.

It consists of three elements: two elements in the first plane (the dog and hand) and the third, a white and blue dripped circle behind these. It is the third element that unifies the to other elements.It shows the duality in believing in a real thing and believing in something that only shows you a signifier of the real  (in this case the hand with a shape of dog). The hand with a key tattoo represents the call to open our minds, while the hand with the puppet dog represents this ‘locked’ sense to see beyond what is immediately real! The background black represents the emptiness when we have nothing in what to believe.

I intend to invite the public to take their own meanings about my piece. I am quite sure that somebody will say “oh one hand and one dog!” but also I hope there will be a kind of person that says “oh two dogs!” The points of view are various and sometimes we don’t need eyes to see…

In Kuressaare, there is a wall ‘Good morning to spring’. Because Saaremaa is my home place, I’d really love to hear about that one too. Was it your idea or did the owner have a vision? Is she a fictional character on the wall or someone you know?
I was walking with my dog (the same dog in my piece “Seeing isn’t always believing”) and I saw one of my friends painting there, so he invited me to paint another wall. The owner was also very open, he said that we can do whatever we want. So my idea was to relate my piece with the restaurant, I decided to paint a girl drinking coffee.

I always use photo references, sometimes my own photos, sometimes friends photos, or even just random photos from internet, but in all cases I ask for permission and I put my own touch on them. Usually I modify the cranial structure, making the cavity of the eyes a bit bigger to put more emphasis in the look.

What brought you to Estonia from Chile? How has it been so far?

I came here because my wife is from Estonia. Life here has been OK, but if we talk about street art I feel that there aren’t enough opportunities to paint. Estonia has some restrictive laws and zero tolerance against graffiti and so on… So that´s why it is a bit complex in that sense, but thanks to the street art festivals I think and hope that this will change. 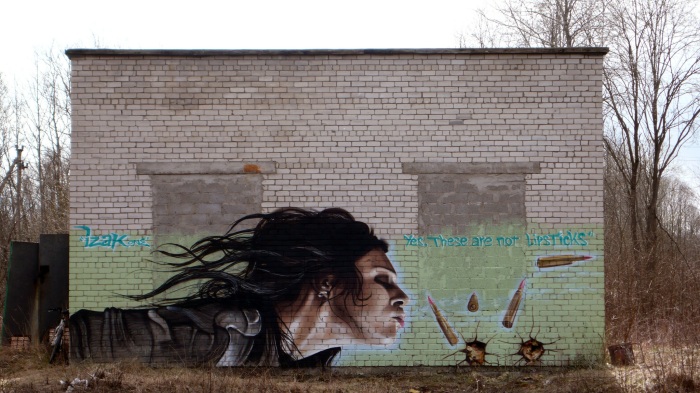 What are your experiences of street art in Chile? Are there festivals? How do th public react?

In my country we have tolerance about painting in public space and the police are relaxed in this sense, because street art isn’t regulated. We have many street art festivals and every year there are new ones. Our people really like our pieces and the street art scene in general; it has been in our culture for a long time starting with political murals in the 70’s and 80’s. It’s very nice and very common when you are painting people to approach you and talk with you, they invite you to have lunch, they give you food, drinks or even money just because they like what are you doing. I miss it a lot. 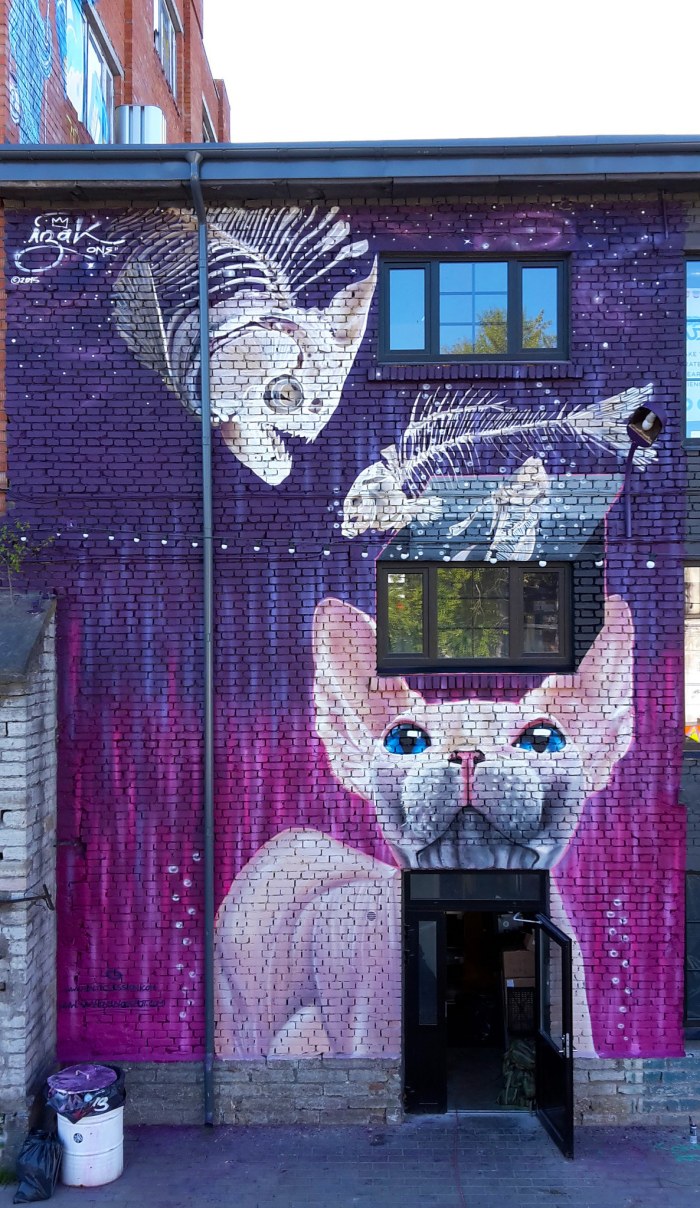 Which is the largest (in terms of scale) project you’ve ever done? How did it come to life?

I painted a big vertical mural in one school. I am a long time friend of an art teacher and she proposed the idea to the new director of the school to create a big mural in the schoolyard. The director comes from London and is a big fan of street art, he supported it since the beginning. It was approximately 195 square metres!

Do you paint everywhere you travel? What are your travel/painting plans for the near future?

Yes, every time I am travelling I try to paint something, I have some projects in central America for the next year, but personally I would like to travel to Australia. They have quite a strong street art scene, and also to London!

Interview by Merilin Ülem
All images courtesy of Izak One