We recently published the first in our interview series with one of the most creative graffiti crews, The Weird. Read our interview with Frau Isa here! Up next is DXTR.

Who are you and where are you from?
I’m DXTR, a 33-year-old artist and illustrator living and working in Berlin, Germany.

How did you get to graffiti/street art?
Actually this was a classic scenario, some friends at school already painted graffiti illegally and I thought it’s a good idea to paint as well 🙂

In recent times you started to paint pixelated graffiti in illustrations. How did that development happen?
Those who are familiar with my work might know that I like a simplified aesthetic, very graphic and bold imagery. Perhaps this pixelation was a logical next step to simplify my work. I was working on some character design for an Australian client and somehow came up with the idea of pixelating the character. It looked so rad – I had to experiment with the pixel idea! The first tests on walls have been amazing. The most important part is that I don’t know how a piece will look like in the end. Most of the time I have a sketch and reproduce that sketch more or less exactly on the wall. Now I have a sketch, and the outcome looks strangely different from the original sketch. At this moment it keeps things interesting and refreshing for me.

What were/are your favourite Pixel Art games?
I stopped playing video games at the age of 16 or so, when I discovered skateboarding and graffiti… So I’d say I like the old classics: Street Fighter, Super Mario, Final Fight. I never made PixelArt before though.

Where do you draw inspiration from?
Actually my friends are very inspirational! Check out my fam from the Weird Crew (Vidam, Nychos, Rookie, Low Bros, Cone, Hrvb, Frau Isa, Look) Beside these maniacs, I draw a lot of inspiration from books, music and old myth, fables and legends.

What book would you recommend to our readers?
I like Murakami f.e., “No man’s land” by Blexbolex is a nice graphic novel.

Do you listen to music whilst creating? If so, what?
Sure thing, I’m listening to lots of Rap and Electronic Music most of the time. Listening to some classic MF DOOM tracks right now.

What are you working right now?
At the moment I’m doing a few nice client projects, I’m working on some unfinished canvases and I have two collaborative prints in progress. My next show will be in the US in the spring.

When did you decide to form the Weird?
We’ve known each other for quite some time. In 2011 after meeting at several festivals, we decided that it would be a good idea to join forces.

How does the Weird manage to mix all of your different art styles?
I think it’s the ability to understand each other’s artistic vision and what each one of us likes to do most. We’ve known each other for a while now and so it’s easy to collaborate and come up with concepts that fits each person’s unique style. 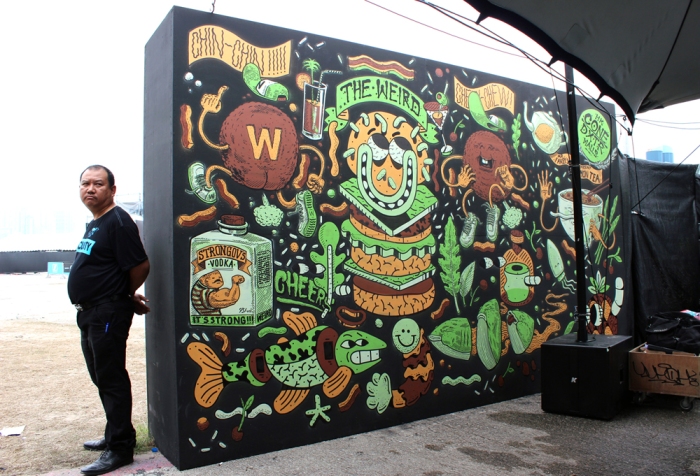 A few weeks ago I came across an article in a magazine that had an illustration that I thought was a total rip-off of your style. Turned out it was made by you, but it was credited with your real name. How and why do you separate your commission work from your work as the artist DXTR?
Actually I don’t separate commissioned work and personal stuff, it looks the same most of the time anyway! 90% of client work is done with clients that I can relate to, so there’s not really a reason to separate it from my work catalogue. In this case I was in the US for a mural project and working on that Business Punk article at night in my hotel room. It was the first work for that magazine and I totally forgot to tell them the right credit, so they used my full name. My fault, let’s say due to jet lag 🙂