In September the town of Tartu, Estonia, hosted its 7th annual street art festival: Stencibility. Celebrating its success, our blogger Merilin Ülem gives her account of the week’s exciting events.

This year, Tartu’s pioneering street art festival Stencibility opened on a Monday evening with an outdoor screening of the film “Girl Power”. An honest and inspiring documentary that follows an international lineup of female graffiti writers, Girl Power documents the hardships that women suffer in a graffiti scene dominated by men. A short introduction was made amongst rented chairs and borrowed blankets and thus, the festival had begun.

For me, however, it all kick-started a few days previously, when two artists – Mr. Thoms and Fra Biancoshock – invited me to photograph them completing pieces they were working on before the festival officially started. Capturing their work in action, I saw their murals and installations come to life. Pictured below, Mr. Thoms used the pillars of an old pump station to his advantage, creating a 3D mural and integrating the surrounding trees into the bold cartoon forest scene.

Milanese installation artist, Fra Biancoshock, describes himself as an EPHEMERALIST. With this self-classification of his work he perpetuates his idea that the transient installations he creates exist only briefly in space, but can live on in time through film and photography of the work. One of his ‘ephemeral’ installations named “V.I.P. -Very Important Poverty” invited a host of different reactions from passersby. The piece presented a homeless man sleeping on the street with a red carpet beneath him and bollards surrounding him, looking so authentic one could easily have believed it to be a real person. Some passed it by not even looking, others stared in confusion and a few stopped to snap a picture. Installations aren’t very common in our city. 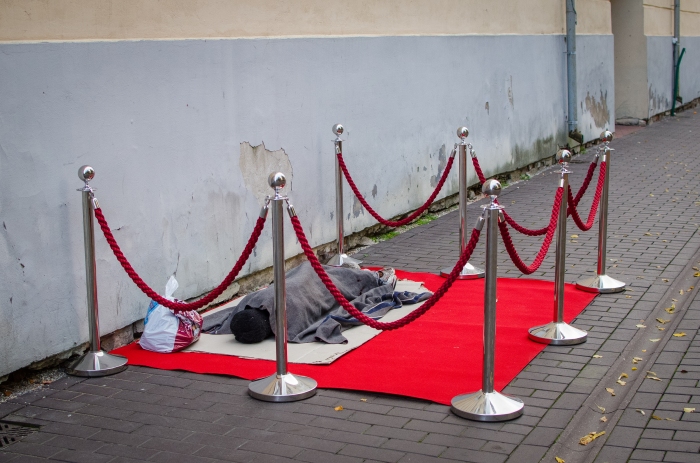 To diversify the programme of events even further, Stencibility invited participation from street-goers with projects on string art, cuprocking (the art of attaching plastic cups to wire fences) and art with found objects. The intriguing new invention SprayPrinter was used to demonstrate a whole new style of spray-painting (an invention that is deserving of a separate article, but let it be known – it’s awesome)! On top of this, I had a blast running around the city in search of a missing piece of a puzzle… Yes literally, a cardboard puzzle piece. The treasure worth winning was the coolest reproduction of Edward Von Lõngus’ latest art-piece. I didn’t win because apparently I suck at finding things, but I have blisters to show for the effort and had a laugh nevertheless.

To save my feet any more hardship I joined one of many organised bike tours to explore the city’s artworks with Stencibility organiser Kadri. Weaving in and out of the streets, seeing secret pieces I didn’t know I hadn’t seen, Kadri described the stories behind them and I listened intently. At this festival there are so many people with vast amounts of knowledge, and even better is that they have the platform to share this knowledge with a crowd that wants to listen.

Later on in the week, the Tartu Debate Club spoke on the subject: “Organised vs Organic Street Art”, a talk that steadily leaned towards a discussion on whether or not Stencibility should have more international coverage, sponsors and foreign names. Moving into an old abandoned house dotted with paintings by Animalitoland, Okeiko, Maari Soekov and Sänk,  a panel discussion entitled “Hearts and Dicks” was held, pulling focus on the recurrence of these two symbols throughout street art history and attempting to answer why and who draws them so often. The setting of the abandoned house was also host to a one-night-only exhibition where fires were lit and people could roam freely around the house exploring the roof and forest-like garden, not at all resembling the city we were used to. As the night drew in and it got darker outside, the atmosphere turned mystical inside; it had the “you had to be there” effect. Topping it all off, some cleverly named beer (quoting lines from Tartu’s infamous first graffiti wall) made Stencibility really feel like our festival.

A new piece using the SprayPrinter

What made Stencibility a great festival was the goal it had in bringing artists and audiences closer together. The cosy and friendly atmosphere of the closing film screening, followed by an artist Q&A was the perfect setting for a final interaction between artists and audiences. “Rurales” is an offbeat and occasionally random glimpse into the daily lives of artists going to the countryside to paint and stencil. The film’s themes and the event itself encapsulated one of Stencibility‘s main goals: getting new artists interested and involved in street art, giving them courage go outside and try for themselves. That’s the point, I guess – to simply go and express yourself. I hope that the festival grows bigger year by year, I hope it brings new art to our streets and I know that it has already inspired tonnes of ideas. ‘Til next year then. What a blast!