Ask any local, Johannesburg isn’t an easy city; its gritty, sometimes unsafe and just a little wild. The city centre is also littered with graffiti and street art. Colour and imagery snake their way across the walls of this edgy, concrete jungle and few people feel more at home in its streets than South African graffiti writer Mars.

How long have you been doing graffiti and how did you get started?

I got started in high school through skate boarding and just being out there on the streets with my friends. One of them started doing graffiti and then a few of them. It was just a fad for them, but 12 years later I am still doing it.

Have you always been artistic and why graffiti?

I’ve always had an interest in art and drawing on stuff, but graffiti is not like fine art or drawing at home, its outdoors, and I like being outdoors. It’s adventurous and is about creating stuff or vandalising stuff, and I guess in the beginning it didn’t have too much to do with creating actual art, it was mostly about being adventurous and vandalising shit. I can’t say I was a Picasso from age one because I wasn’t.

Why did you chose the alias Mars?

I was out with a friend of mine; I first drew a little alien character on paper and then sprayed it on the wall. I wanted to write something next to it, so asked him for his opinion and he said I should write Mars. It’s the most obvious thing when you are 15, an alien comes from Mars and it’s just stuck with me since then. At the time I would have chosen a different name if I had known there were so many other Mars’ with the same alias.

What is your inspiration?

I draw inspiration from a lot of different things, basically anything and everything. From other graffiti artists and the boundaries they are pushing, both in their lives and their art, to my environment. Some of my inspiration is rooted in the city of Johannesburg, which subconsciously creeps its way into my artworks. I’m a product of my environment I guess.

How would you define your style?

I like to think of myself as quite diverse and not really sticking within a “style box”. There are certain characteristics that make my stuff, my stuff but at the time I am not trying to fit into any particular style. I like to explore different styles and different things. Diverse is my style if that’s a style. 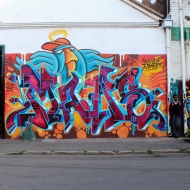 How traditional do you think you are as a graffiti artist?

I used to be quite traditional. When you are younger you are quite purist and hard headed. You only listen to rap, spray-paint walls, hang around people who do the same, and you wear your pants really baggy. But you can grow out of that, the scary thing is that some people don’t, but I definitely did. These days I’m not so traditional, I mean I don’t frown upon street art or people doing any other types of art. There will always be that little bit of friction, but it’s very small. Some guys will put other people in a box, like this is street art, and fuck them, they are not doing graffiti, that’s real and you aren’t real but what is being real? I am a little bit traditional but not too much, I’m in the now.

You have had two gallery exhibitions over the last few years; tell us a little about them.

Graffiti in South Africa is finally being recognised as art with some value and I wanted to explore that space, do something a little different and not just be out there on walls. I wanted to try and make my gallery work user friendly. Graffiti is very in your face with no place for second opinion, when you are doing a wild style and writing your name, it isn’t really something that the public will look at and wonder what that person is trying to say. It says what it says. But in the gallery world, artists are a lot more open to others interpretation, and trying to communicate different types of feelings, you are not conveying direct messages. I feel like the gallery space allowed me to do and explore that. At the moment I do a gallery show every two years but maybe at some point I will do it more often.

You are from Joburg, South Africa. Tell us a bit about the graffiti scene there.

Johannesburg is kind of gritty, the CBD is quite a low socio-economic space and in many places you are free to paint wherever you want. A lot of the people in the actual city don’t mind you painting because the walls can look horrible and there is rubbish everywhere. It’s kind of like New York in the late 70’s, where graffiti started originally.

The graffiti culture is quite fresh and young. The city and graffiti artists have a lot of energy. It’s a contradictory city with all kinds of things going on. So just in terms of that, it’s made the graffiti scene and guys do everything. There will be graffiti artists who bomb and do tags, but it will be the same guys who will be able to do realism and paint full colour murals. I think just because of the way the city is and how contradictory things are here, it’s kind of played through into the graffiti.

Describe the growth or evolution of graffiti in Johannesburg.

Since the beginning it has obviously grown and picked up momentum. At first there was no Facebook or widespread internet access so artists here didn’t know about what people were doing internationally. I wouldn’t say Johannesburg has its own style of graffiti necessarily, like you might see in Brazil. It’s kind of a mix of everything at this point in time.

How has social media affected graffiti?

I was painting before social media, which has affected all our lives in different ways. It has had some positive effects and some negative effects. The positive effects are if you are coming from a LSM background or poorer country, social media and the internet open up doors for you. You can communicate with and look at what other artists are doing without buying an expensive plane ticket. But on the negative side of things, it has made graffiti a whole different world. What you paint no longer lives solely on the streets, it’s documented forever online. Graffiti was about getting fame from painting your name, but now you make a nice video and get a million people to see it on Youtube and you are famous. You don’t have to go do a million tags or paint trains. It’s in some ways cheating the system, but it’s also maybe a whole new system of its own. Some people are purist and graffiti will always only be on the streets for them. The crazy thing is some artists have hundreds of thousands of followers online, but you go to their city, and their work won’t be up anywhere. They will paint one wall in their city. Some dude will come out of his studio, see that people are taking note of art in the street, paint something cool, take one photo, he won’t even know how to use a can yet and millions of people will see it. There are guys in Joburg who do more mainstream art but see that graffiti or street art gets you followers. They don’t understand graffiti, it’s just quick fame and they are not living the lifestyle. Even when I wasn’t getting anything out of it, I was still doing it.

How do you choose where to work/paint in Johannesburg?

In Johannesburg there is a lot of space and people are quite open to letting you paint – so if I like the spot, don’t already have something in the area, and if there is shade because it’s hot, then I will paint there.

How do you make a living?

I make a living spray painting on walls as a commercial artist but I wouldn’t consider it graffiti. It’s done with a spray can but it doesn’t have anything to do with graffiti culture. Sometimes the briefs can be pretty open which is cool, so I do get to paint what I want.

What are your future art plans? What is ahead?

For now I am content doing what I am doing, but at the same time I can’t see myself doing this forever, even just physically as it is really tiring. I’d like to move into a more comfortable space, maybe into a gallery space. But I am talking like twenty years from now, I’m not saying like in five years because I would still like to be doing what I am doing. I love spraying.