Tartu is usually a rather quiet place and street art is never really frowned upon or dismissed. The general public is accepting and encouraging. We have some great pieces on our streets and we have artists, who do really great work. There are galleries under our bridges and on the walls of our bigger streets. They appear there like in every other city, they keep changing and it’s always very enthralling to see what comes up.

There are always expectations among people and I’m not going to discuss that, it’s just that our city has this youth vibe. The University is here, many art people and the right environment for creating. We have all this potential and all those who want to say things to the people who make decisions. We, the youth, always look forward for new self expressions. But it has been quite toned down and safe.

Every now and then though, a piece emerges, which gets the media attention and also gets people talking more about what should be done and what shouldn’t. One of those pieces was under a bridge called Sõpruse (meaning friendship). Drawn on two separate pillars, it was beautifully done by street artist Edgar Tedresaar and created during our biggest street art event – Stencibility. It portrayed two of our presidents. A former president, much loved Lennart Meri and our current president, also widely popular, Toomas Hendrik Ilves. The piece was done in pop art style, which was chosen to show the two men as symbols of our time.

It stood there for a while and then it got changed as somebody drew Vladimir Putin’s head instead of our current president’s, with the text „Uncle Vova is going to fix everything“. They also changed his tie, which is kind of a symbol of our president.

It’s of course very common to redesign someone else’s work on the streets and over the years similar cases have happened, but it was the way it was done that upset some people. It was the fact that our president was painted over with the president of Russia.

It was also a professional job. Done by not some amateur, but by a person who knew what they were doing.

As it got the public’s attention and even some international media coverage, Tartu City council decided it was best painted over. So they did. There is no president there, not ours, not foreign. It is now a grey square. Someone put a girl up there with some text (and then someone wrote “nasty” there too) but for a long time it was just a grey square. A safe way to mute. Lennart Meri is still there, on the other pillar, and I bet he’s going nowhere, one can visit his portrait anytime.

What I find interesting is that usually, when cases like this occur, the conversation goes on. People want to enter the dialogue and see what happens. Not this time. It hasn’t changed the way I guess many people hoped for. It was supposed to be the case of do it now and do it loud, but nothing really came up. I’m still hoping that maybe someone will carry the conversation on with something else to say on the subject, but to this day, it’s been quiet. It’s always the political part, which makes people nervous and it’s understandable.

Our street art is quite peaceful . I can’t say maybe it’s because we haven’t got seriously “big” issues to discuss (every city, every country has issues to discuss), maybe it’s because so many people know each other and no one wants to take credit or maybe we’re just waiting for the right cause to rebel against. Whatever the reason, the silence broken was a step forward in a rebellion against authority, a step that hasn’t happened for some time now. We have have had some works that make people talk and also listen, but what reaches the common crowd hasn’t been truly this concrete.

If someone wonders why the case was such a news bomb, they can just go and google our nation’s history and today’s connections with Russia and realise that that portrait was indeed a bold move.

Our street art festival is starting next month and I’m sure some great work will be done, that can be added to our city’s hall of fame. 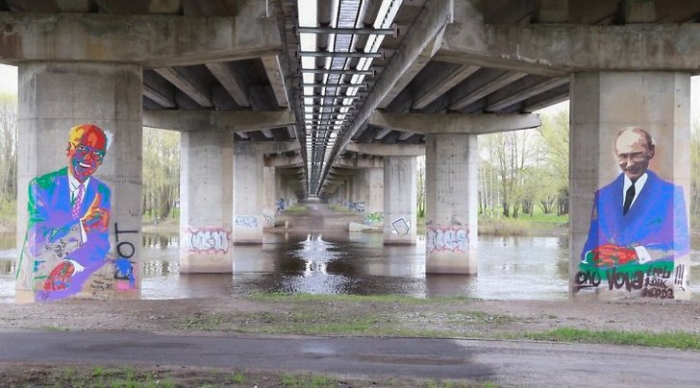 Close up of the Lennart Meri Mural. Photograph by Merilin Ylem